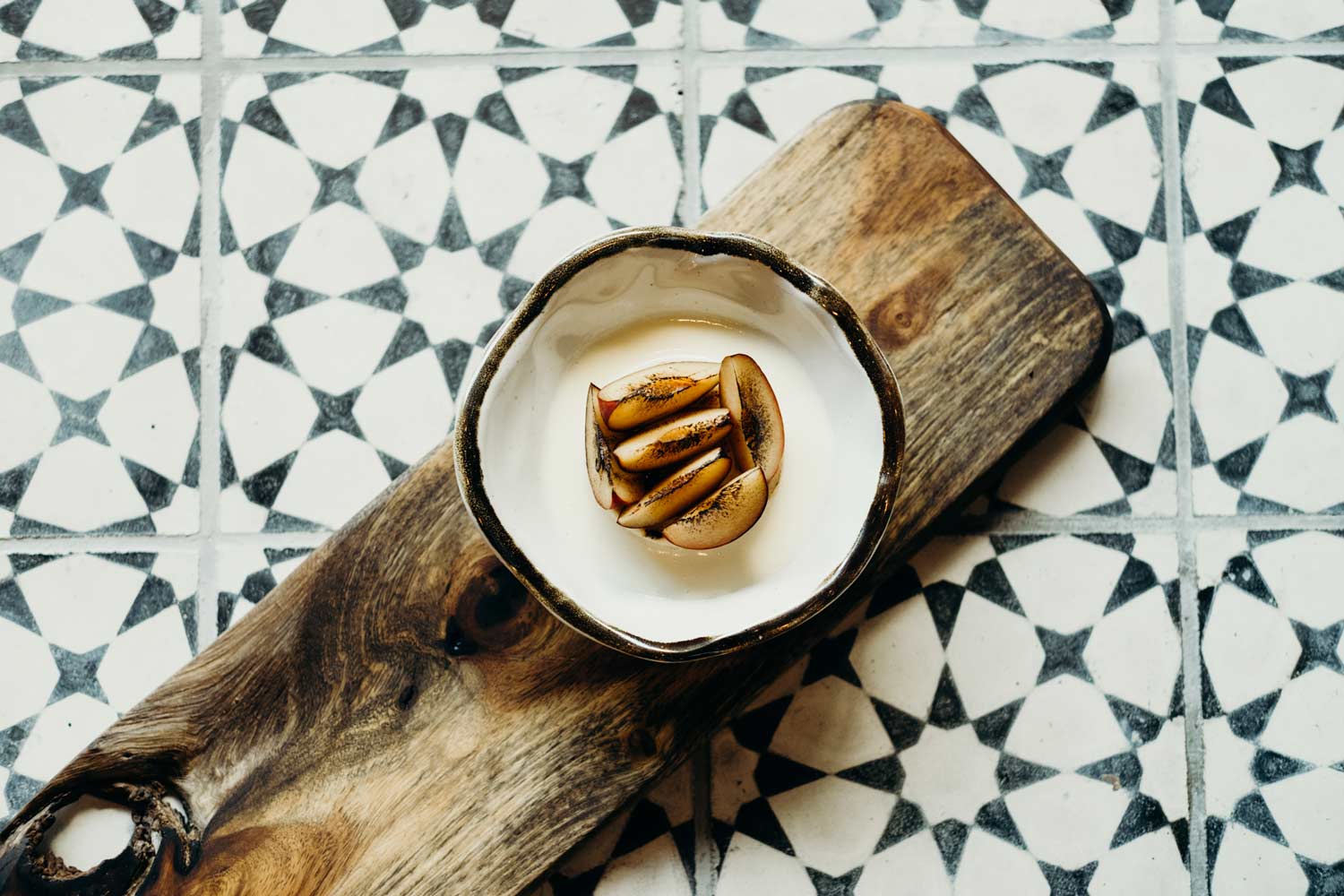 Culinary Adventures for a Healthy Life

For thousands of years plant-based diets have been favored by the Eastern philosophies of Hinduism, Buddhism, and Taoism, as killing animals and eating meat, was associated with spiritual pollution. As cities and incomes grew, culinary culture (especially Western) left rustic fields for processed food and land-intense agricultural products like beef and chicken. This shift has caused great harm to the health of humans and is a leading contributor to the advancement of climate change.

Globally, food culture is undergoing a transformation back to plant-based eating as a declaration of non-violence to ourselves, animals and the planet. That said, palates have grown accustomed to creative, rich and flavorful meals typically not associated with vegan cooking.

Our culinary team understands that plant-based food preparation doesn’t have to sacrifice flavor, creativity or satisfaction. At Palmaïa, you’ll find natural, cultivated dishes on menus that are predominantly plant-based with non-vegan options.

Executive Chef Eugenio Villafaña’s affinity for restaurants started at a young age, traveling with his mother who worked for Aeromexico and helping out in family-owned restaurants. After attending culinary school, he got his big break when he cooked a family Christmas dinner and his cousins’ husband, a chef for Princess Cruises, suggested he apply for a job. For the next four years, Chef Eugenio worked on Princess Cruises and rose from making 1000’s of cappuccinos a day to Executive Chef. He also had the opportunity on breaks to attend several Culinary of Art Institute classes studying regional cuisines from around the globe.

From there he moved to Celebrity Cruises and opened the Azamara Cruise line. His training led him to study under Chef Alain Roux, the French-British Michelin Starred Chef and chef-patron of the Waterside Inn in England. Advancing to corporate, he became responsible for the menu development of all 14 Celebrity Cruise ships and sourcing and purchasing all the food. He built strong relationships with suppliers learning to choose the best quality food and broaden the spectrum of his palate.

Following the cruise life, he worked at six hotels and continued his culinary training specializing in raw vegan food at the Sunfood Kitchen under Chef Bruce Horowitz. Here, he met David Wolfe a luminary in raw foods and learned how to cook and develop flavors without compromising nutrients.

“Being a chef is not just about nurturing your palette but also nurturing your body. There is an art and science to cooking and preparing food where the composition maintains a hyper-wealth of nutrients and doesn’t create toxic by-products.” —Eugenio Villafaña, Chef

Chef Eugenio designed the menus for four restaurants and a food truck. Each menu begins with ingredients local to a region (such as Mexico) then takes you on a culinary voyage influenced by cooking techniques found in France, Italy and other areas around the globe.

At Palmaïa, we practice empowerment and support for the native community. Food is sourced from local farmers and suppliers in small batches. Chef Eugenio meets directly with each supplier keeping the focus fair-trade and sustainable. There is also a green-house on the property that will grow fresh herbs, tomatoes, cucumbers, microgreens, and mushrooms.

Plant-based is also a lifestyle choice that resonates deeply with the creator of Palmaïa and Sous Chef Mauricio Maldonado. Mauricio eats a strictly vegan diet and transitioned three years ago after receiving an aggressive lung cancer diagnosis. The change saved his life and he hopes to provide education on the health benefits of plant-based diets to anyone interested in expanding their horizons.

When you gather together to feast, expect to find refined plant-based dishes, with a bounty of flavors that arouse the taste buds, feed the soul and can only be found at Palmaïa – The House of AïA.

Amenities Map How can we help you?

Included with your stay